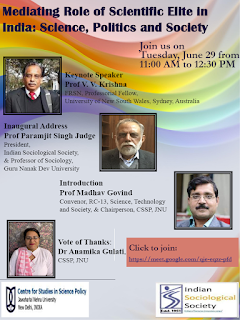 Law in a Time of Uncertainty and Global Change
Online School of Law Summer School
28 June – 5 July 2021
Join a cohort of our global student community to explore some of the key legal issues arising from the changes in our world, focussing on current topics in international commercial law, regulation of technology, sustainability and human rights and inclusion.
Register Online & Schedule
---------- Forwarded message ---------
Please find the schedule for the summer school as published https://www.bradford.ac.uk/mlss/summer-school-law-2021/
Posted by Anup Kumar Das No comments:

Highlights
Abstract: The Electrical (E)-rickshaw as of the many emerging technologies for e-mobility has witnessed critical and challenging issues like sustainability, accountability and responsibility while it becomes one of the new transportation means in India. The responsible innovation approach is interesting to analyse for acceptance and adoption of E-rickshaw as a legal vehicle technology for India. Paper also addresses whether the case of E-rickshaw as a component of the public transport in Delhi can be a responsible innovation. The interviews, focused group discussions, non-participant observations, and survey methods used to trace deliberation and participation processes for the emerging innovation. The findings suggest that reliability, safety, ownership, solidarity, competitiveness, affordability, last-mile connectivity, accessibility, happiness, gender equity, non-polluting, employability, social equity, comfortability, healthiness, profitability as universal and culture-specific values are embedded in this innovation. These values make this product socially, economically and environmentally sustainable in the region. 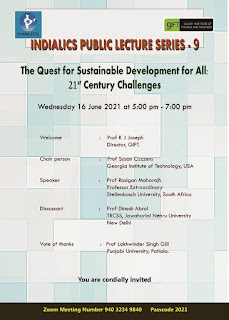 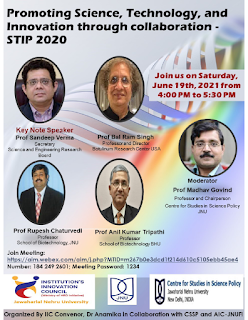 INSA Young Historian of Science Award has been instituted by the Indian National Science Academy and awarded annually are intended to Young Historians of Science in India in recognition of their outstanding contributions in any branch of History of Science coming within the purview of the Academy. The research carried out in India or abroad by the nominees will be taken into consideration for the award.

Number of Award: The number of awards to be made in any year will be limited to maximum two.

Age Limit: Any citizen of India, who has not attained the age of 35 years on December 31, of the year preceding the year of award, shall be eligible for the award. Only those born on or after 1 January, 1986 are eligible for consideration in the year 2021. 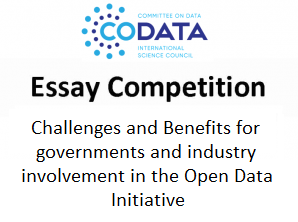 CODATA Connect Early Career and Alumni Network in collaboration with the CODATA Data Science Journal (DSJ) is pleased to invite to its second Essay Competition for Early-Career Researchers (ECR), defined as a university undergraduate, graduate, post-graduate students or early career researchers/ data professionals within five years of completing their highest qualification. CODATA Connect exists to ensure a structural and sustained collaboration and support for the activities of the alumni of CODATA-RDA Summer Schools, of the CODATA China and Trieste Training Workshops and other early-career researchers and data professionals involved in the CODATA community and those of partner organisations.

Topic for the Essay: "Challenges and Benefits for governments and industry involvement in the Open Data Initiative"

The panel of judges consists of representatives from the CODATA community and editors of the CODATA Data Science Journal. The judges' decision is final and may not be appealed. The review process will be single-blind: judges will not know the identity of the authors.

Essays should be interesting, original and provocative but also clearly situated in a body of knowledge. It is important that the authors show an appropriate knowledge of the chosen research area for discussions. Other criteria include but are not limited to:

The selected essay winner will be announced on the CODATA website https://www.codata.org by Thursday 30 September 2021. The winner will also be contacted through the CODATA Connect email.

CODATA reserves the right to publish the winners' name and affiliation, as well as the winning essay in the CODATA Data Science Journal: http://datascience.codata.org.

If you wish to read the Essays of the Winners of the 1st Essay Competition 2020, they are shared on https://codata.org/initiatives/strategic-programme/codata-connect/codata-connect-essay-competition-2020-winner-esther-plomp-tu-delft/

UNESCO Save the Date

Press Briefing: The UNESCO Science Report: The Race against Time for Smarter Development.

After a brief presentation on the new report, its editors, Susan Schneegans, Jake Ryan Lewis and Tiffany Straza will be available to answer questions.

Please register on the following link before the press briefing:


If you would rather not receive future communications from UNESCO, let us know by clicking here.
UNESCO, 7, place de Fontenoy, PARIS, NA FRANCE France

Intimate Labor at Biomedical Frontlines: Situated Knowledges of Female Community Health Workers in the Management of COVID-19 in India
by Sanghamitra Das & Samhita Das, Catalyst, 2021. Published in a reputed open access journal, Catalyst, affiliated with the Society for the Social Studies of Science (4S).
Abstract: Media reports of the COVID-19 pandemic in India have highlighted the important role that India's female community health workers, the Accredited Social Health Activists (ASHAs), have played in managing COVID infections in India. This paper explores the epistemic basis of ASHA work to understand the significance of their role. Through a discourse analysis of textual media articles, we show that the ASHAs' routine and COVID-related caregiving practices are a form of embodied, intimate labor rooted in their situated, community-oriented knowledge. This labor is devalued as emotional and feminized care work, which denies the ASHAs professional status in the public healthcare system of India and, in turn, reflects a hierarchy among health practitioners that stems from the status of objectivity/disembodiment in biomedicine. We find that, despite their low status in the public health system, ASHA workers develop a self-concept that enables them to self-identify as healthcare professionals, motivating them to continue providing essential healthcare services during the pandemic. We argue that an official recognition of the epistemic value of ASHA work would help to overcome the age-old nature/culture dichotomy that informs what counts as valuable, legitimate, formal medical knowledge. Furthermore, our analysis provides a critique of the gendered devaluation of care work within a political economy of health increasingly dictated by a neoliberal logic.
DOI: 10.28968/cftt.v7i1.34781
Keywords: ASHA workers; Intimate Labor; Feminization of Care; Situated Knowledges; COVID-19/Sars-Cov-2
Download Full-Text PDF
Posted by Anup Kumar Das No comments:

Paris, June 11 – Spending on science worldwide increased (+19%) between 2014 and 2018, as did the number of scientists (+13.7%). This trend has been further boosted by the COVID crisis, according to UNESCO's new Science Report, The Race against Time for Smarter Development.

But, these figures hide significant disparities: just two countries, the United States and China, account for nearly two-thirds of this increase (63%) while four out of five countries lag far behind, investing less than 1% of their GDP in scientific research. The scientific landscape thus remains largely a landscape of power.

Published every five years, the new report provides an overview of science and science policy.

Artificial intelligence and robotics are particularly dynamic fields, according to the report which notes that almost 150,000 articles were published on these subjects in 2019 alone. Research in artificial intelligence (AI) and robotics has surged in lower middle-income countries, which contributed 25.3% of publications in this field in 2019, compared to only 12.8% in 2015. Over the past five years, more than 30 countries have adopted specific strategies, among them China, the Russian Federation, the United States of America, India, Mauritius and Vietnam.

Other fields of research that are crucial for our future attract significantly lower investments. In 2019 for example, research into carbon capture and storage, only generated 2,500 articles, 60 times fewer than artificial intelligence. Research on the subject is actually declining in six of the ten countries leading research in this field (Canada, France, Germany, the Netherlands, Norway and the current leader, the United States). Similarly, the field of sustainable energy remains under-explored, representing only 2.5% of global publications in 2019.

There is a long way to go before science contributes its full potential to sustainable development.

The world must focus on providing science with the tools it needs. As Audrey Azoulay, Director-General of UNESCO, points out, "better-endowed science is indispensable. Science must become less unequal, more cooperative and more open. Today's challenges such as climate change, biodiversity loss, decline of ocean health and pandemics are all global. This is why we must mobilize scientists and researchers from all over the world."

Although international scientific cooperation has increased over the last five years, open access still only applies to one publication in four. Moreover, despite the tremendous collective momentum generated by the fight against COVID-19, many obstacles stand in the way of open access to research in much of the world.

For example, more than 70% of publications remain largely inaccessible to the majority of researchers. The report documents efforts to break down these barriers, which are sources of both inequality and inefficiency. New models for the circulation and dissemination of scientific knowledge in society must be implemented.

UNESCO has been working on this since 2019, when it began preparing a global standard-setting instrument for open science. If adopted at the Organization's next General Conference in November 2021, the Recommendation will provide the international community with a shared definition and framework in which to develop the transparent, inclusive and effective science the world needs.

The report also underscores the importance of diversity in science; the development of this critical discipline must involve the whole of humanity. It finds that only one third of researchers in the world are women. While parity has almost been achieved in the life sciences, it is still a long way off in many sectors of growing importance. For example, women represent only 22% of the workforce in the field of artificial intelligence. This is a problem not only for today, but also for tomorrow. We cannot allow the inequalities of society be reproduced, or amplified, by the science of the future.

Science must unite all of humanity to face the challenges of today and tomorrow. The report urges the restoration of public confidence in science, and reminds us that today's science contributes to shaping the world of tomorrow, which is why it is essential to prioritize humanity's common goal of sustainability through ambitious science policy.

Every five years, the UNESCO Science Report provides an update of trends in science governance. Written by 70 authors from 52 countries, it aggregates data on spending, personnel, scientific publications and patents. The latest edition tracks progress towards the UN's 2030 Sustainable Development Goals and the rapid progress of the Fourth Industrial Revolution. It also tracks the impact of the COVID-19 pandemic on global research and innovation.

Download the report and other press materials in our media corner:


If you would rather not receive future communications from UNESCO, let us know by clicking here.
UNESCO, 7, place de Fontenoy, PARIS, NA FRANCE France

Locations of visitors to this page